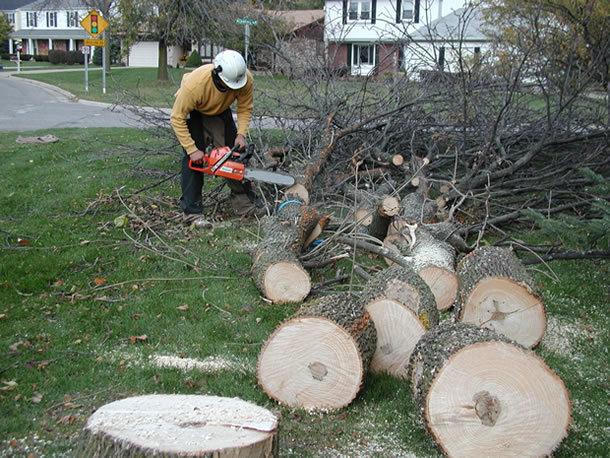 This is the fate that awaits ash trees now that the deadly emerald ash borer has arrived in central Pennsylvania. (www.emeraldashborer.info)

Kiss your ash trees goodbye … unless you treat now

Ash-tree owners: The day of reckoning is here.

An imported wood-boring bug called the emerald ash borer has been wiping out ash trees over the eastern half of the United States, and it’s now fully parked in Pennsylvania. The bug is poised to kill just about all of the 308 million ash trees in our forests, parks and neighborhoods.

“Our part of the state is definitely in the eye of the storm,” says Dan Devlin, director of the state Department of Conservation and Natural Resources’ Bureau of Forestry. “It’s impacting us quite a bit. Drive around, and you’ll see dead ash trees everywhere.” 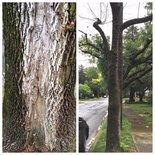 “It’s a real bummer, but we had no choice,” she said, adding that neighbors on her street have cut down six others.

“Our Forest Hills neighborhood (near Linglestown) has been devastated by the emerald ash borer,” says Dan Berman, a resident there. “I can drive down the streets and keenly point out ash trees that are just a season or two away from meeting the tree-trimming service.”

The alarming part is that the emerald ash borer is so devastating that it’s expected to kill nearly 100 percent of ash trees within four to five years.

In other words, if you have one, it’s almost a sure bet to die – unless you take action to protect it with regular applications of a chemical insecticide.

See Penn State Extension’s tips on how to identify an ash tree.

The emerald ash borer is an Asian native that likely rode wooden packing materials to America. It was first discovered destroying ash trees in Michigan in 2002.

The emerald ash borer larvae, top, does the real damage feeding inside tree trunks, while the adult, below, is a green beetle-like flying insect.  (U.S. Forestry Service)

Since then, it’s moved mostly south and east by firewood and flight, killing tens of millions of all species of ash trees in 20 states.

The first ones showed up in central Pennsylvania in 2012.

“It didn’t take long to get from Michigan to here,” says Devlin. “It takes four to five years to kill a tree. So by the time you see damage, the borer has been there several years. It jumped ahead of everybody.”

As spring unfolds, we’re about to see this bug’s peak performance.

Many municipalities, power companies and tree-owners already are cutting down ashes pre-emptively. It’s too expensive to chemically protect masses of ash trees, and if you wait until they’re failing, they became fall hazards and much more expensive to remove. (Brittle dead and dying ash trees are more hazardous for tree companies to work on than healthy, solid ones.)

This is the interior damage the borer larvae do to an ash tree, causing it to fail.
(Credit: Jackie Kauffman)

Do you ignore the coming threat, figuring you’ll pay later if necessary while hoping the tree doesn’t fall down in the meantime?

Do you bite the bullet and pay a few hundred dollars now to remove a tree that might look fine?

Or do you invest hundreds or even thousands of dollars for unknown years of treatments to save your ash from the borers?

The most effective treatment is an insecticide called emamectin benzoate, which tree companies can inject into the trunk of ash trees every two years.

Michael Dunn, an arborist for Bartlett Experts, says it’s about 99 percent effective and is best applied in May or June.

Imidacloprid is a less expensive and more readily available insecticide that homeowners can apply as a soil drench. But Dunn says it’s only about 50 percent effective and has to be applied each year.

The key is that you can’t wait until the tree is badly infested. Signs of trouble include dieback of branches; bark that turns light-colored (“blonding”) and then starts splitting or sloughing off; a rush of new shoots sprouting from the trunk, and woodpeckers poking holes in an attempt to feast on the larvae inside.

The telltale sign is D-shaped holes in the trunk and large branches. Those are holes made in May to early June by the newly matured adults exiting the tree to fly around and mate in summer.

See pictures of damage signs from the emerald ash borer.

Adults look like elongated beetles – less than the size of a small paperclip – with shiny, dark-green shells (hence the “emerald” in the bug’s nickname).

After mating, females lay eggs in bark cracks. The eggs hatch into larvae that look like fat, cream-colored, worm-like critters that feed on the wood inside, ruining the trees’ ability to move water and nutrients up and down the cambium layer.

“Once a tree has emerald ash borers, the treatment rate goes down exponentially,” says Dunn.

He says chemical controls are more of an option for homeowners who have just one or a few trees that they don’t want to lose. The decision boils down to how valuable the trees are and whether you’re willing to spend the money to protect them.

“My recommendation is to get somebody in there who’s an experienced professional,” says Devlin. “One problem is that ash is brittle and breaks easily once it starts to fail… The rule of thumb is that if there’s an infestation within 10 miles, and you don’t have the borer yet, you might have a year before it shows up.”

Some say you may not have to treat forever. If the borers move through like a tsunami wave and wipe out most ash trees, their populations could crash in 15 to 20 years when there aren’t any/many ash trees left to eat.

Others fear there will be enough floating around to always be a threat – or worse yet, that the bug will adapt to other species, such as related plants in the olive family. (The fringe tree is one example where a few emerald ash borers already have been found.)

Still others are putting their hope in the few ash trees – called “lingering ash” – that have managed to survive in the borers’ wake.

Penn State University, for example, has lost 95 percent of the ash trees that forest biologist Dr. Kim Steiner planted in a 2,100-tree experimental green-ash grove in 1975. Most of the rest are expected to die this year.

“But we have about 15 trees remaining that show little to no dieback,” says Steiner, now director of the Penn State Arboretum.

Those and others in Ohio are being studied for their borer-resistance with the hope that their genetics could be the base for a rejuvenated after-life.

Ironically, ash was widely planted as a shady substitute for elm trees, which were nearly wiped off our botanical map due to the deadly Dutch elm disease in the 1960s.

Disease-resistant elm trees are now being brought back after decades of back-crossing in which “lingering elms” played a key role.

The poetic justice is that these new elms may now step back in as one of the possible replacements for ash.